I love the way the English language sometimes creates a link between two things that make sense...the word "season" being one of them. I think seasons are to the planet what seasonings are to food. You know, the way thyme, oregano, and parsley turn plain spaghetti sauce into your grandmother's secret recipe? That's what seasons do, here on earth. Your backyard becomes more than your backyard at the first sign of color, whether it's the pastels of spring, the rich greens of summer or the warm amber tones of autumn. 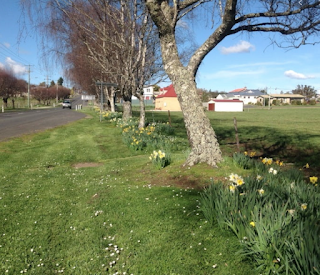 As far as planetary seasonings go, spring is one of my favorites. In this area, after a winter full of gray, it's nice to see these kind of outrageous pops of color everywhere. I don't know if it was pioneers planting along the old wagon trails and homesteads (that's the rumor among the locals), or ODOT, or guerrilla gardeners did it, but the medians of the highways, the fields, and dirt curbs are all exploding right now with bright yellow daffodils, scattered about here, there and everywhere, all blooming right now. 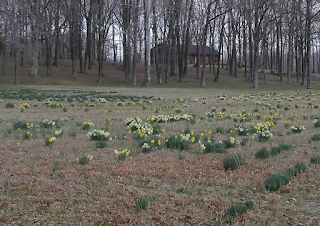 It makes even the most mundane drive up Interstate 5 pleasant, especially when you throw in the blossoms from all the trees which adorn the sides of the roadways as well. The seasonings of the season indeed.

There's something innately hopeful about planting daffodils by the side of the road -- or planting anything, really --  trees, vegetables, or even the act of having kids. It's betting on the future; something that certainly isn't easy in these times of ours but probably has never been a 100 percent guaranteed success at any point in history, really.

Planting is an act which says, "I believe there will be a future good enough for this plant to survive." Having kids is the same. I have no idea what kind of mindset or lives the babies being born today will have. But the fact that they exist says that, yes, there is still hope in the world. Hope for daffodils and hope that someone will be around to see them. I like that. 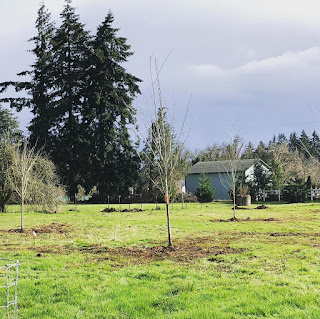 We've added our own dash to hope to the mix recently, in planting a collection of mature trees in our property: five new sunset maples, five pines, two white birches, four dwarf Japanese maples, and a Kelly's Gold Maple out front, to replace the one that died in the ice storm in February. These trees were professionally rescued from a neighborhood vineyard using a giant tree spade. It was sad that wine grape expansion on the property meant they had to go. But the vineyard's loss is our gain. 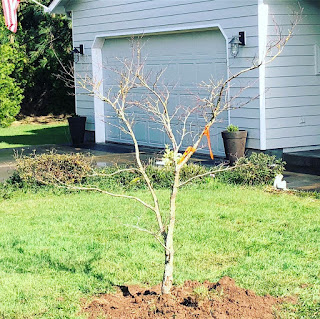 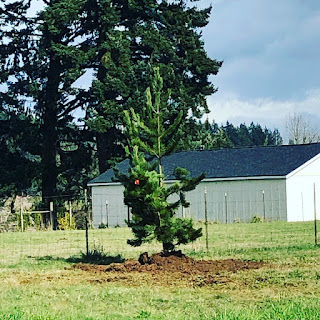 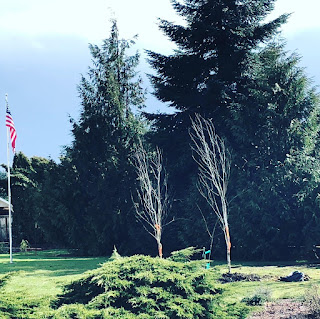 I'm not sure they'll all make it, or what their long term prognosis will look like, as it's early on and they must survive this summer, which may be difficult for a newly transplanted 15 year-old tree. If they do well they will likely outlive me, which is nice to know. They will require a HUGE amount of watering this summer due to their size of their rootballs (we needed a tractor with a backhoe to plant them) but like any other future-based activity, it's a prospect full of hopes, dreams and maybe just a little insanity.

Someday I hope to sit in their shade with a cool glass of something alcoholic at the end of a nice day and listen to their leaves in the wind. Will they make it? We don't know right now, but like all planting projects at their start, we're optimistic and a little dreamy about it. It was the same with our kids, and look how well that turned out. Sometimes optimism proves true, so let's hope it's the same here.

Like anything in life, whether it's planting trees, a garden, or a family, it's the act of starting something new that creates the seasoning in our own lives -- a little kick of spice or a surprise burst of flavor which makes the mundane new again. The hillsides by the highway look sweet and inviting, and our back pasture beckons with the promise of future shade. That's how things look today, anyway. I'll take it.

And so to all of you, may your spring be colorful, your food flavorful and your garden plentiful! Happy spring. 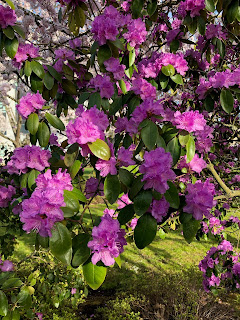 Posted by HotFlashHomestead at 2:03 PM

What it's all about:

The Hot Flash Homestead has hit the road and landed in the great state of Oregon, in the beautiful Willamette Valley, where there is plenty of water and an abundant growing season. Expect a bit of laughter, some discussion on local and sustainable living, and the eternal question: Is it hot in here, or is it just me?

Grown sustainably and with love.